Lazise, situated on the eastern coast of Lake Garda, is one of the Commons of the low lake. This fascinating territory is enhanced by historical elements of architectural value which can be admired in the administrative center and in the hamlets of Colà and Pacengo, where some tracts of Forest Ligana alternate with the typical cultivation of grapevines and olive trees.

The administrative center is surrounded by the town walls with turrets, gates, the castle and the dockyard.

At the old trading port there are the small church of San Nicolò and the customs: events and manifestations are organized in both the restored buildings.

Lazise is considered the first Italian Commune ever instituted; the village became famous in Italy and abroad for its tourist services: camping, hotels, farm holidays and tourist villages and much more.

The presence on the territory of the funfairs “Gardaland”, “Caneva” alongside the coast and the thermal center “Villa dei Cedri” in Colà attract tourists of all ages and from all over the world.

For those who want to reach Lazise by car, the eastern Gardesana and the regional street connecting the two toll booths of Affi and Peschiera are useful infrastructural systems. As an alternative, the nearest railway station is in Peschiera and the nearest airport is in Villafranca di Verona. 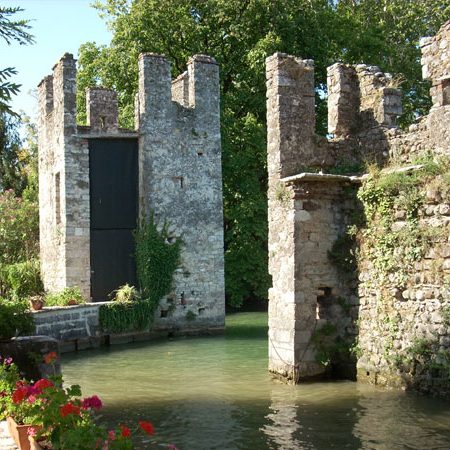 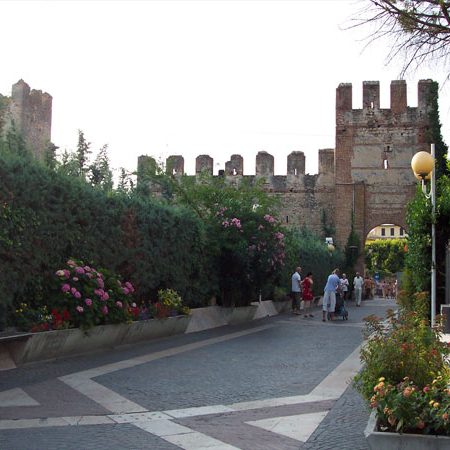 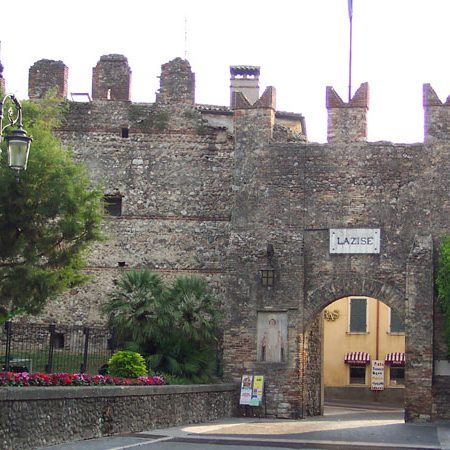 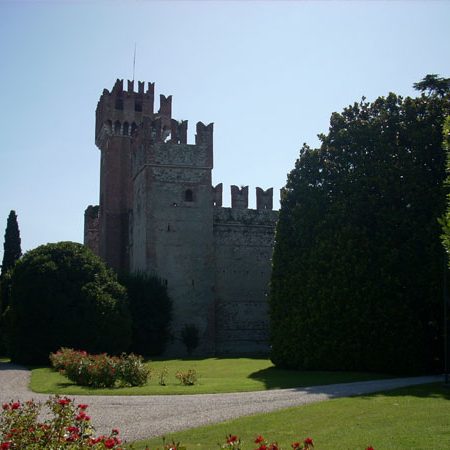 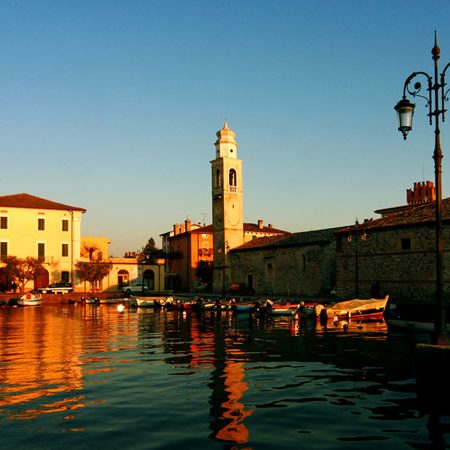 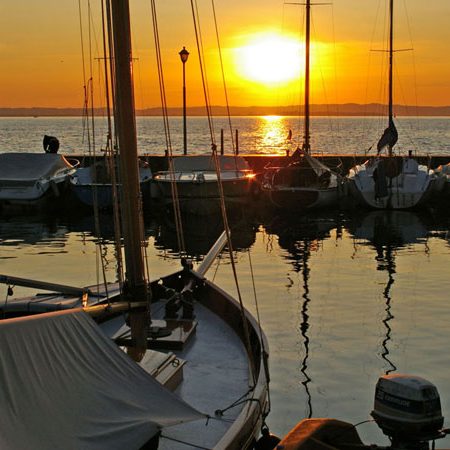 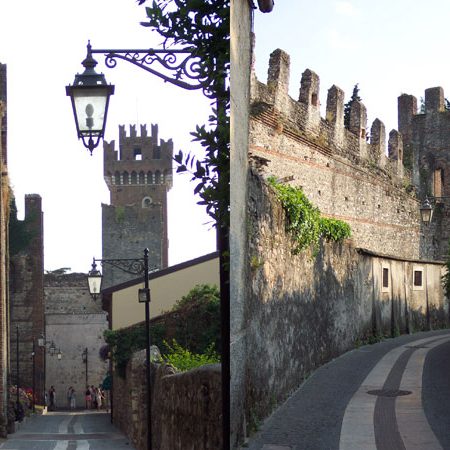 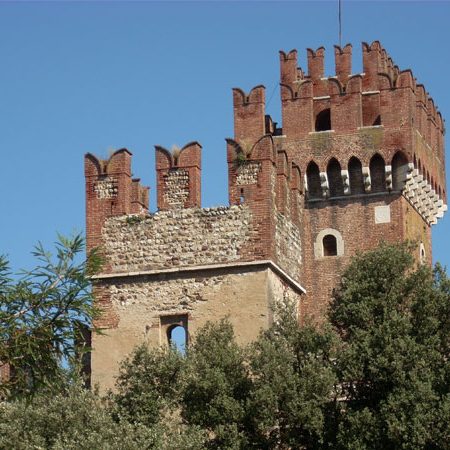 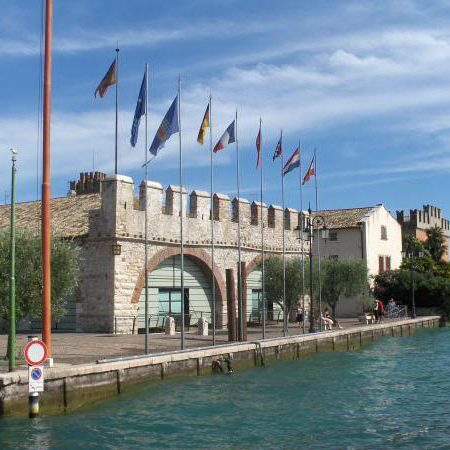 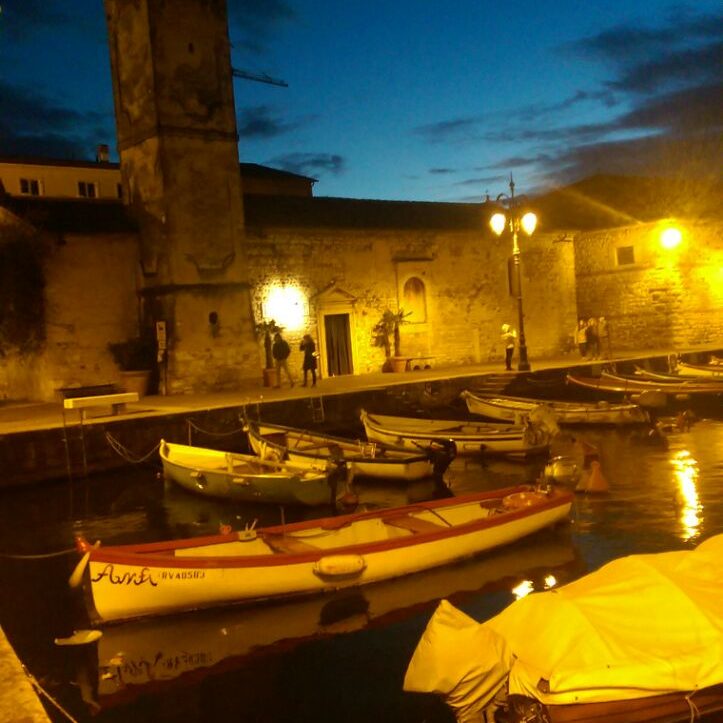 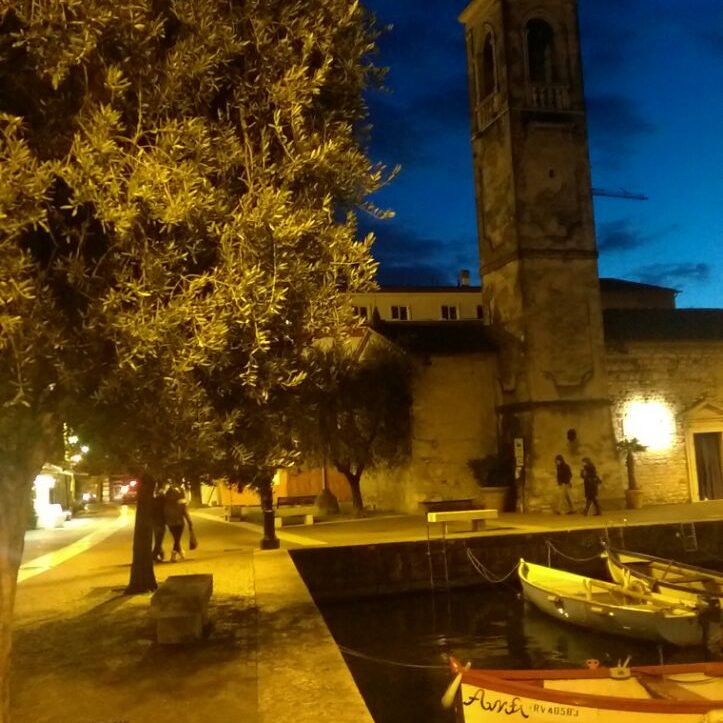 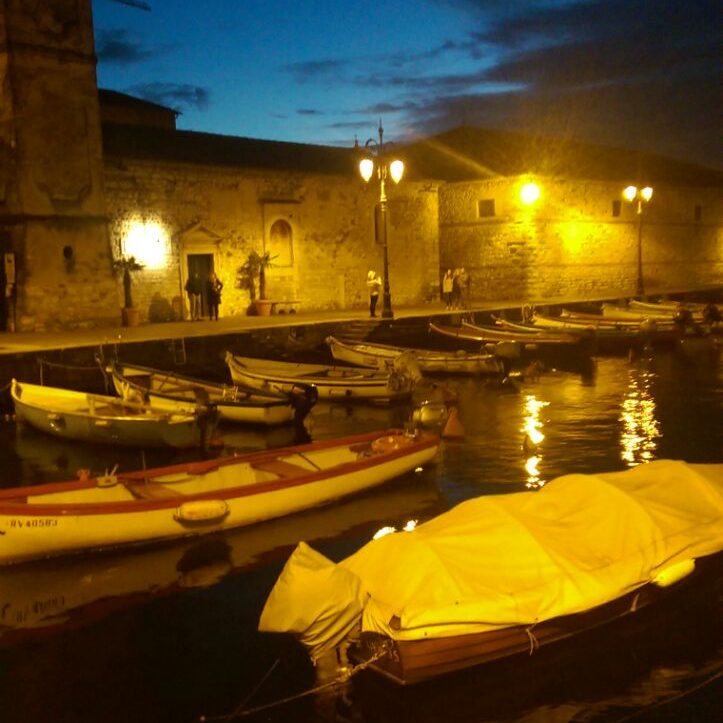 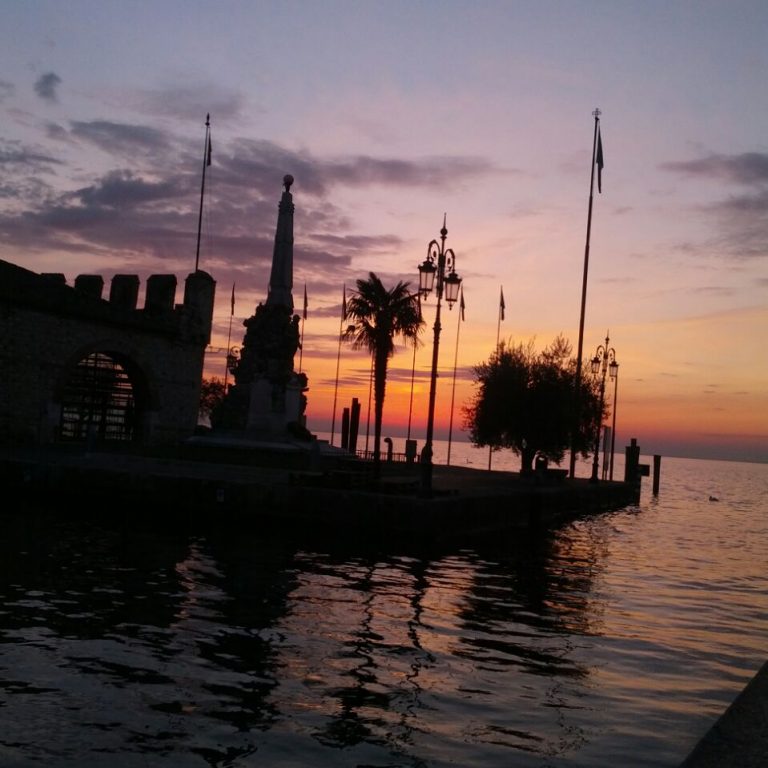 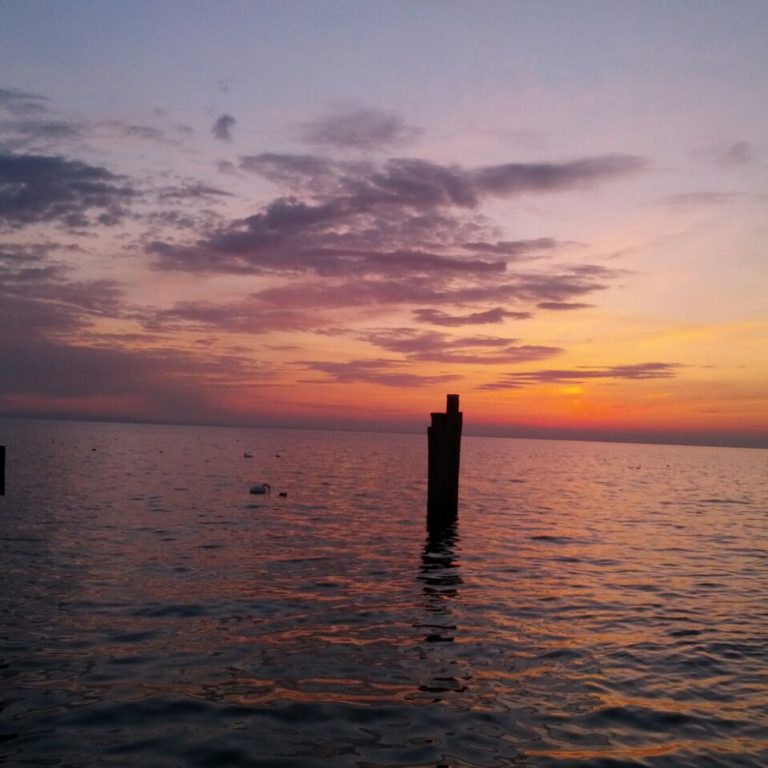 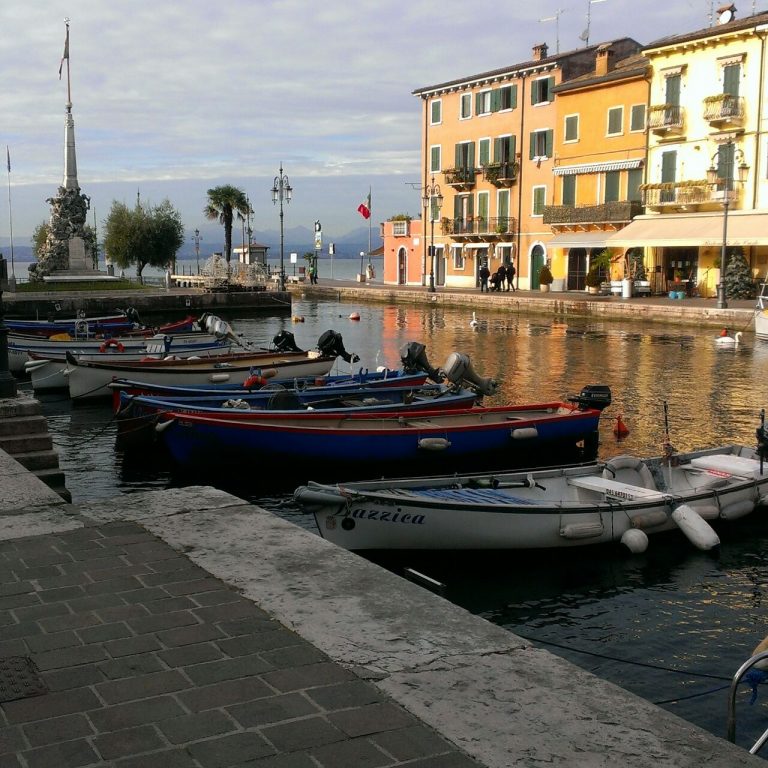 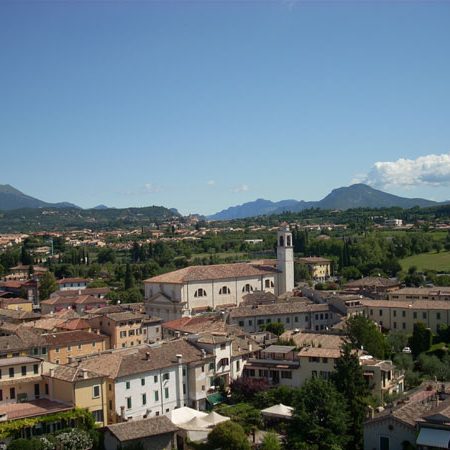 Laceses, the original name of Lazise (attested from the 10th century) derives from the Latin word “lacus”, which means a place on the coast of the lake. The origins of the village date back to the prehistory when, in front of the present built-up area, there were stilt houses, more precisely near the localties of Taoli, Bagatta and Bor. The existence of this ancient inhabited area is testified not only by the presence of stilt houses pedestals on the depth, but also by the discovery of flint-made bits of arrows, scrapers, pruning hooks, whorls, prehistoric fictile material, javelins, knives, fibulas, stickpins, millstones an intact loaf of bread, displayed in the Verona natural history museum.

In Lazise were also found some remains of the Roman Age, like clay –made lanterns, Roman coins of several periods, a Roman gravestone (now set in the Venetian Customs at the port of Lazise) and a memorial stone (set in the municipal building).

In 862 the German Emperor Otto I put on the crown of Italy and of the Empire. He and his army reached the north of Italy through the Adige Valley, pouring down onto the Lake Garda coasts. An encampment was placed in Pacengo (a hamlet of Lazise), on the fields at the eastern side of the port. In 983, Otto II was in Verona to preside over the diet which would have  determined the conquest of southern Italy. In that occasion, 18 village worthies gained from the emperor important trade concessions, such as the right to levy a tax from the Lombard traders landing in the port of Lazise, the exclusive right of fishing in the part of the lake next to the village, the taxation on the transitory goods, the licence to build crenellated walls and to fortify the existing castle, inadequate to the danger of recurring invasions. With Henry IV of Germany (1077) was given the right to the locals of fishing and sailing in any part of the lake and the ownership of the Ligana forest, extended over a large area from the village of Garda to Sirmione. Henry IV concluded virtual the German domination over the lake, officially ended in 1193 after the cession of the Garda rock to the Verona municipality for the amount of 700 silver denarius.

Also Lazise was ceded, with the entire district of the lake, to the Scala family of Verona, who built the stronghold and the dockyard. In the following years, the village was involved in the war between the League of Cambrai and the Republic of Venice, undergoing devastations, sieges and bombings by the foreign forces. The village hung on to the Republic; the Venetians appreciated such faithfulness by including Lazise within their dominions in 1439. After the Congress of Vienna (1815) Lazise and the entire Lombard-Venetian territories were annexed to Austria; only after the Third War of Independence (1866) Lazise was incorporated into the Kingdom of Italy.

The castle consisted in the town wall surrounding the entire center, the stronghold with the tower, and the military port, the dockyard, the curtain and the Cadenon tower protecting the trade port.

The walls had three gates: San Zeno gate, to the east, was appointed for the population: it was furnished with a portcullis and a drawbridge. In a niche of the gate, one can admire a 15th century statue of Madonna with Christ Child, which was previously set on the gate of the old San Zeno church.

Cansignorio gate, at the north, was built with the last part of the town walls and it was named Cansignorio in honour of the member of the Scala family after his death (on a pier of the door the date 1375-1376 is still legible). This gate had military functions: it would have proved useful in case of evacuation. It was kept walled-up to protect the inhabitants against the soldieries passing through Lazise from 1701 to 1955.

Lion gate, at the south, takes its name from the Venetian domination: it probably needed to the Serenissima army, in fact a San Marco Lion is set on a wall near the gate.

This small church is a jewel of Romanesque art: built in the 12th century, it flanks the trading port. It was dedicated to Saint Nicolò, the patron saint of the sailors. The structure of the church was reworked after fires and a subsidence; it was restored in 1953 by the Communal Administration in memory of the fellow citizens fallen during the two World Wars. The main gate of San Nicolò is in front of the customs, while on the façade in front of the port one can admire a fresco of the “Madonna of the People”. Inside the church there are an altar, a wooden crucifix of the 15th century and fragments of frescos which date back to the 14th century; in these works, Saint Colombano is recognizable. On the opposite wall, the fresco of the “Breastfeeding Madonna” was the central part of a triptych, now lost.

The stronghold is surrounded by a moat and has two entrances with ravelins, doors, drawbridges and portcullises. At the eastern side of the wide courtyard lies the palace of the Capitan and the six towers were connected by communication trenches. The fortified tower could be kept isolated by lifting up a precise drawbridge; the actual battlement was built in a second moment, in fact, originally, there was a covered turret.

In the annexed military port, barred by a chain, Galees (a typical kind of Venetian boat) and other small crafts could find protection. The military port is now covered with earth.

10 meters high, with a truss-roof sustained by piers and a façade with battlement, from the two front gates the Galees of the fleet were put onto water. With the affirmation of the superiority of the fire-arms on the defense-systems of the castles, the dockyard was converted into a place for the making of saltpeter, a component of gun powder. Consequently, the commune bought from the Venetian Senate the old dockyard to convert it into customs, gaining the right to collect a determined amount of money for each item passing from the customs. The function of the customs went on until the coming of the railway, which made obsolete the activity of the customs, paralyzing the ancient trade dynamics of the lake.